Please feel free to use the gallery to display multiple images of your progress.
Post Reply
5301 posts

glossieblack wrote:It would blow a dog of the chain here

I never heard that one.

glossieblack wrote:It would blow a dog of the chain here

I never heard that one.

Me either but I like it and will shamelessly steal it

Out on the reef proper at last.

Lousy internet - will post report and pics when I can.
Completed R13 two part nesting rowboat. ST 21 under construction .... where seeking perfection is recognized as the enemy of the good.
Top

We left Great Keppel Island two days ago and headed out to North Reef with its lighthouse (last picture above). By the time we got out there the wind was blowing 20+ knots from the north, which made North Reef an unsafe anchorage. So we retreated some 5 nautical miles back to Tryon Island (first pic below), a small coral cay wooded island on the reef, which provides a measure of protection from northerlies. Got the pick down, enjoyed a few sundowners watching the sunset, had a quick meal, and got our heads down. Around midnight, the weather gods threw a curve ball. The wind swung around to a 20+ south easterly, and we were suddenly on a coral reef lee shore. I spent the rest of the night on anchor watch, making sure we didn't drag. At first light we upped anchor and headed for Heron reef (second pic below).

Such is the cruising life out on the reef. The rewards are magnificent; the cost is the ever present anxiety about ending up on a reef lee shore.

The wind gods behaved themselves while we were snugged up in the channel between Heron (foreground) and Wistari reefs.

Completed R13 two part nesting rowboat. ST 21 under construction .... where seeking perfection is recognized as the enemy of the good.
Top

Always dread those middle of the night wind shifts...
The world always seems brighter when you've just made something that wasn't there before - Neil Gaiman
Top

Completed R13 two part nesting rowboat. ST 21 under construction .... where seeking perfection is recognized as the enemy of the good.
Top

Beautiful! If I lived there you'd never get my mask and snorkel off

Had to look it up. We call them snapper here... 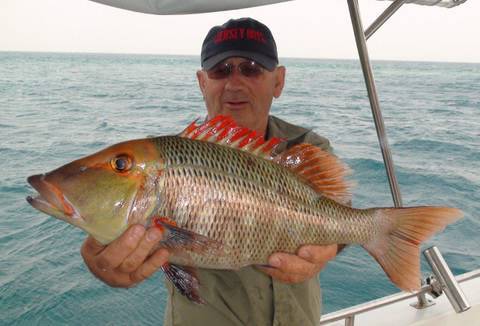 Looks yummy!
The world always seems brighter when you've just made something that wasn't there before - Neil Gaiman
Top

Actually....being a fish nerd I looked it up by family and genus... They are a separate family from our snapper and grunts but have characteristics like both. Still looks delicious!

The Lethrinidae are a family of fishes in the order Perciformes commonly known as emperors, emperor breams, and pigface breams. These fish are found in tropical waters of the Pacific and Indian Oceans, and Lethrinus atlanticus is also found in the eastern Atlantic. They are benthic feeders, consuming invertebrates and small fishes. Some species have molariform teeth which they use to eat shelled invertebrates, such as mollusks and crabs.
The world always seems brighter when you've just made something that wasn't there before - Neil Gaiman
Top

Thanks Cape Man and Cracker Larry.

Sailed approximately 20 nautical miles SE from Fitzroy Lagoon to Lady Musgrave Lagoon. They share many similarities, the main difference being the latter has a small wooded coral quay island. When cruising south as we are at the moment, Musgrave is the last of the true reef anchorages before switching back to mainland ones. So it somewhat of a end of reef cruising mecca, where many a reef sailing lie is told over a sundowner or two. We're about to join in.

Users browsing this forum: No registered users and 5 guests