Please feel free to use the gallery to display multiple images of your progress.
Post Reply
36 posts

Jokes on you!
He has an motor under the rear seat there, He just wanted to keep his still close at all times.

I've been spending most daylight hours I have off working on getting fairing just right. I sourced a trailer and plan on working on a few cosmetic issues once it's up on it, after the hull is finished. I got the inside all faired and painted out, and actually was able to slowly flip the boat solo. I put a lot more glue on the outside than I wish I had and I have at least 3 days of sanding, putty, sanding, etc before I can figure the outside will be satisfactory. In the meanwhile I have a few questions 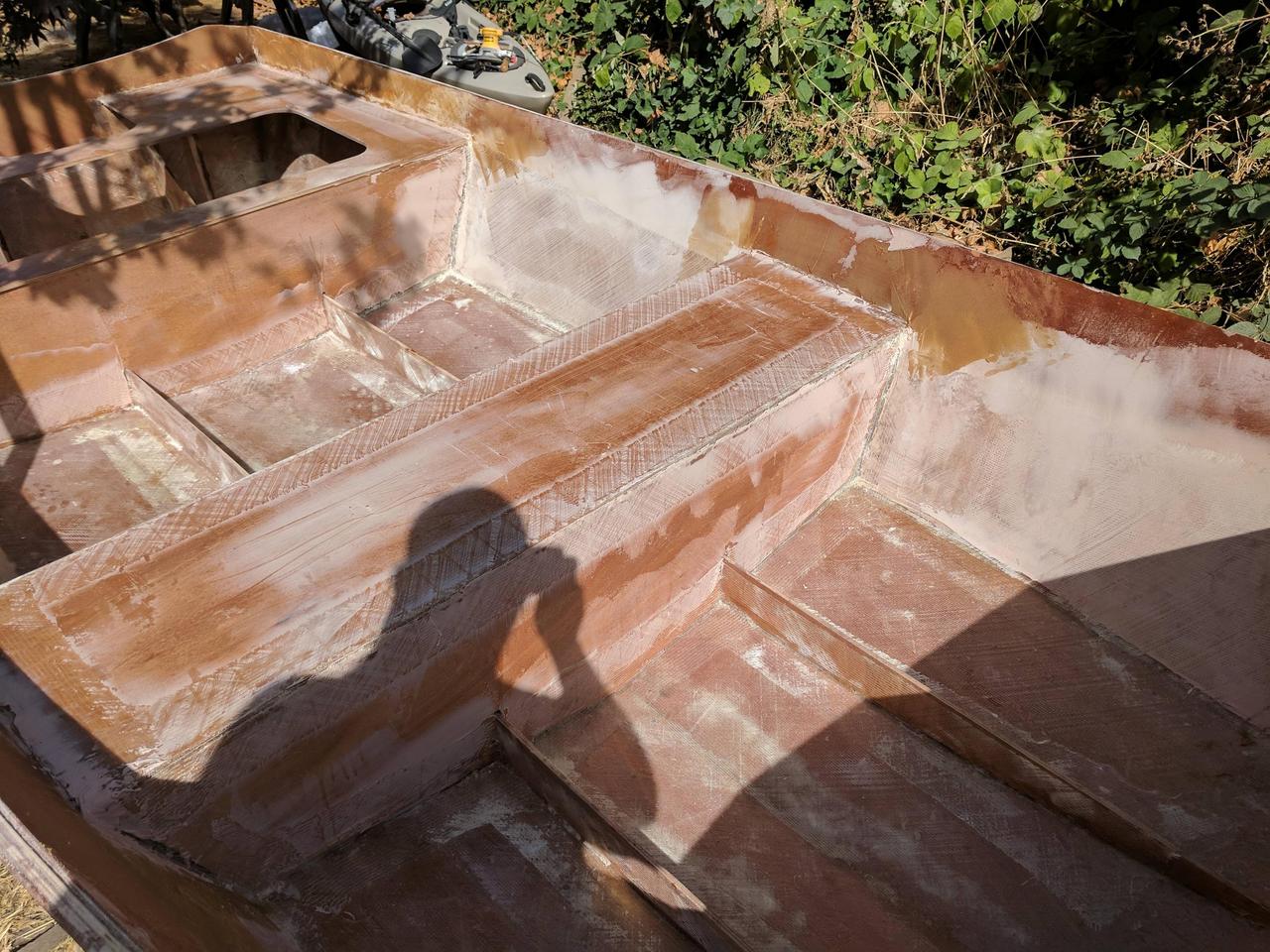 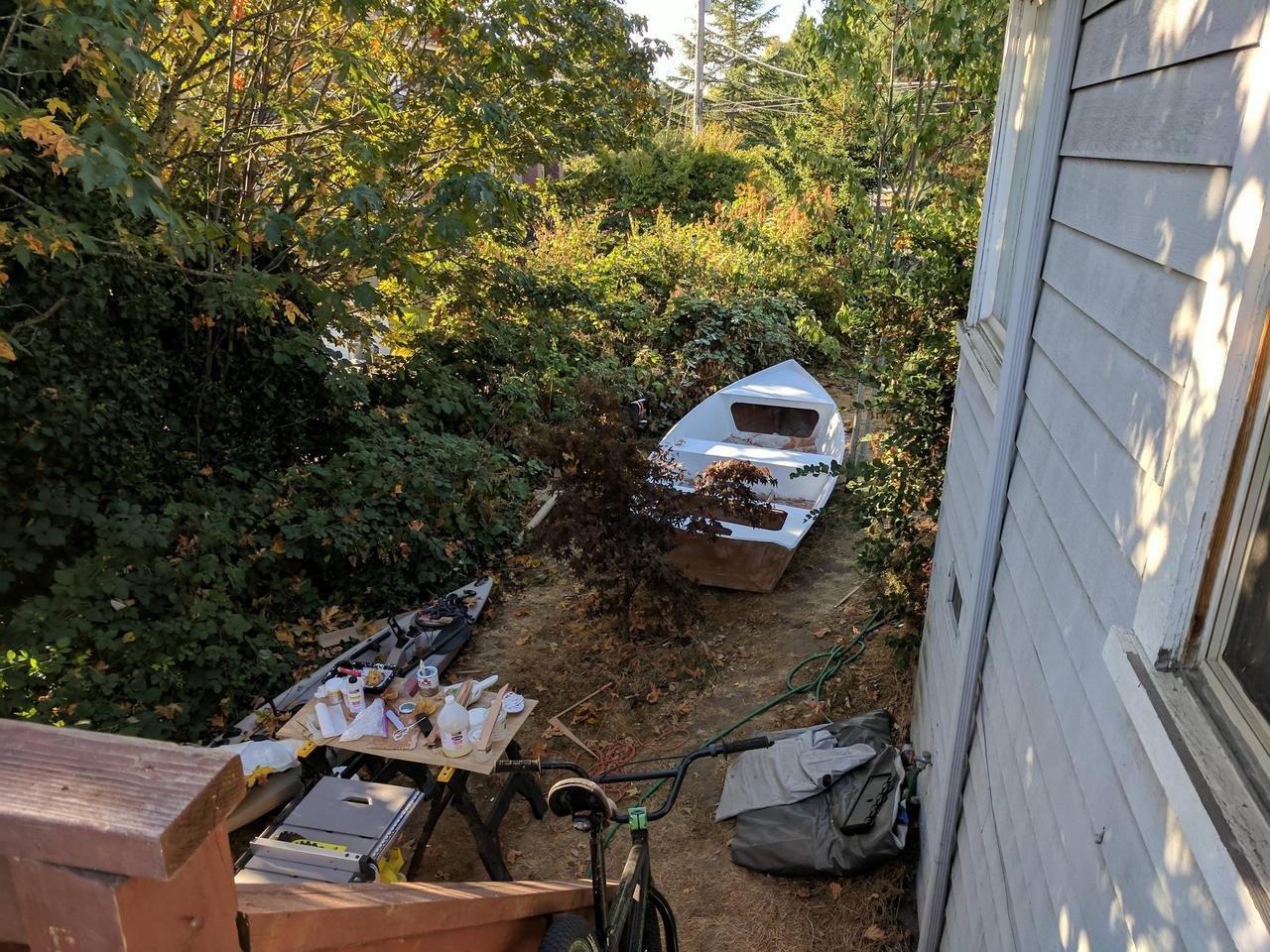 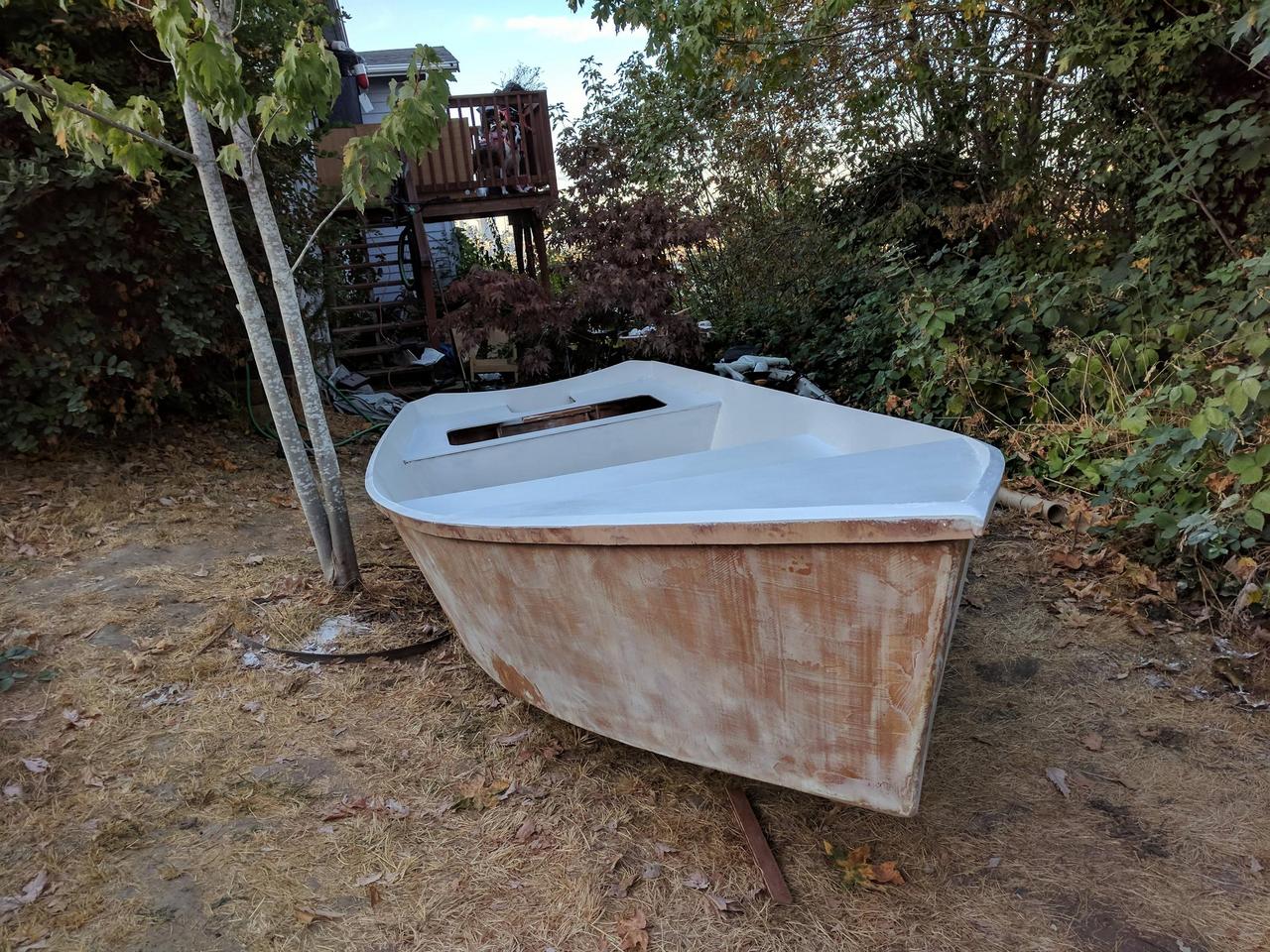 Do I need to, and should I work in a motor well?

I can machine a jack plate, or a stronger transom mount out of plate aluminum I have on hand. Given that I have a 20hp motor, should I?

Outside of limber holes if I decide I want a sole, and scupper/drain holes on the rear deck if I find it collects water, and a brass drain for the hull, do I need any other holes? I scoured and did google-fu to try to answer my own questions but came up a bit short.
Top

You have a motorwell, I see that cut in the rear deck, no need for more.

For drainage, picture the water flow: along the keel and along the stringers. Think of water that could puddle in the corners between stringers and frames if you leave the boat outside uncovered. If stored on a trailer at a good angle, you need only limber holes in the frames.
Jacques Mertens - Designer
http://bateau.com
Top

Upon completion, I got a few of the internal bits, as we say up here, kennewampus. They're an inch off, maybe, at side to side, enough to tell by sight. I won't show you until it's fixed. I think not having a perfectly flat surface to build upon just helped to get thing off centered, and I'm looking forward to getting it in a garage to work it over, sometime soon. 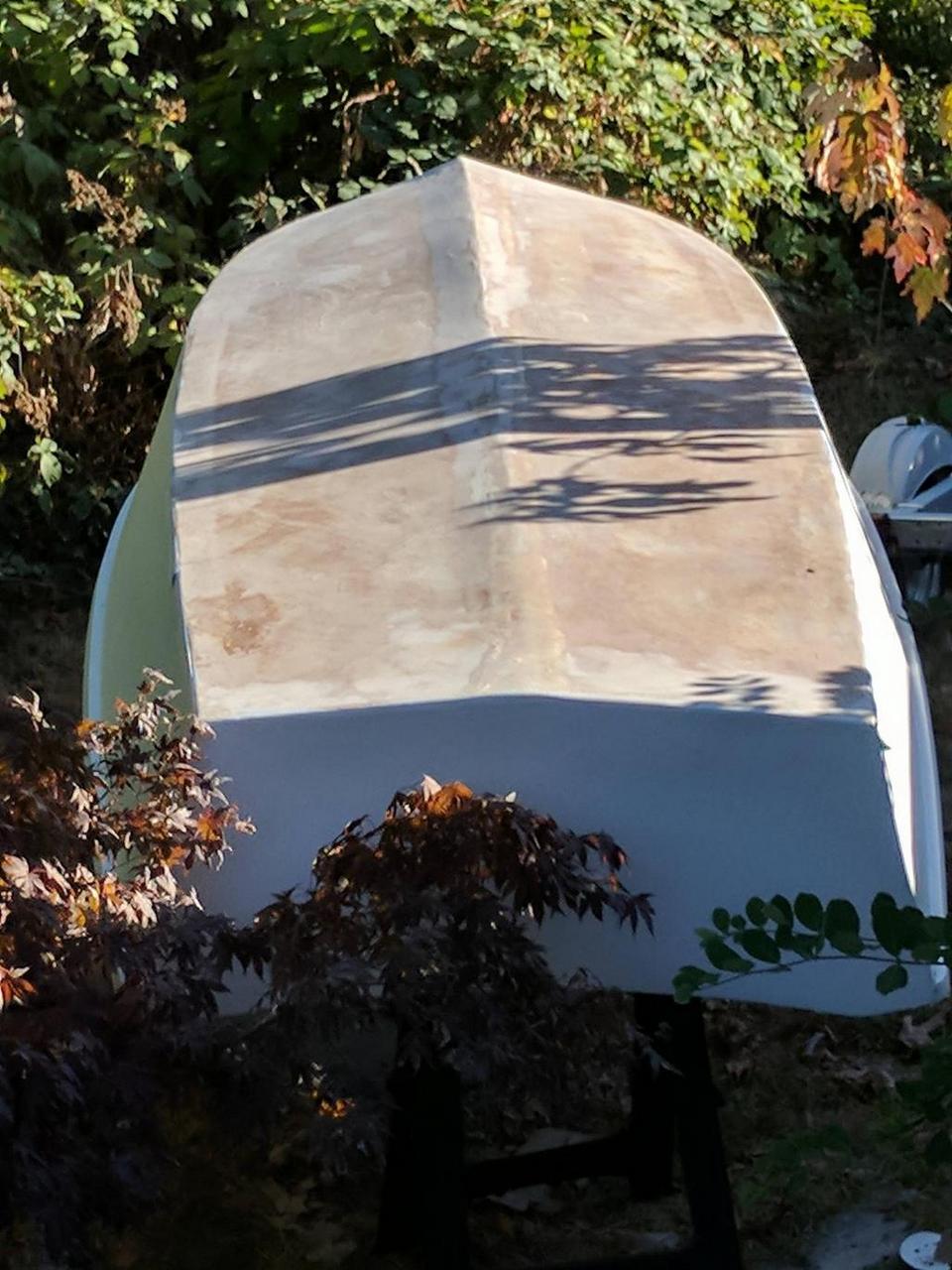 This guy, and a few others, gave their lives to my graphite layers on the hull. 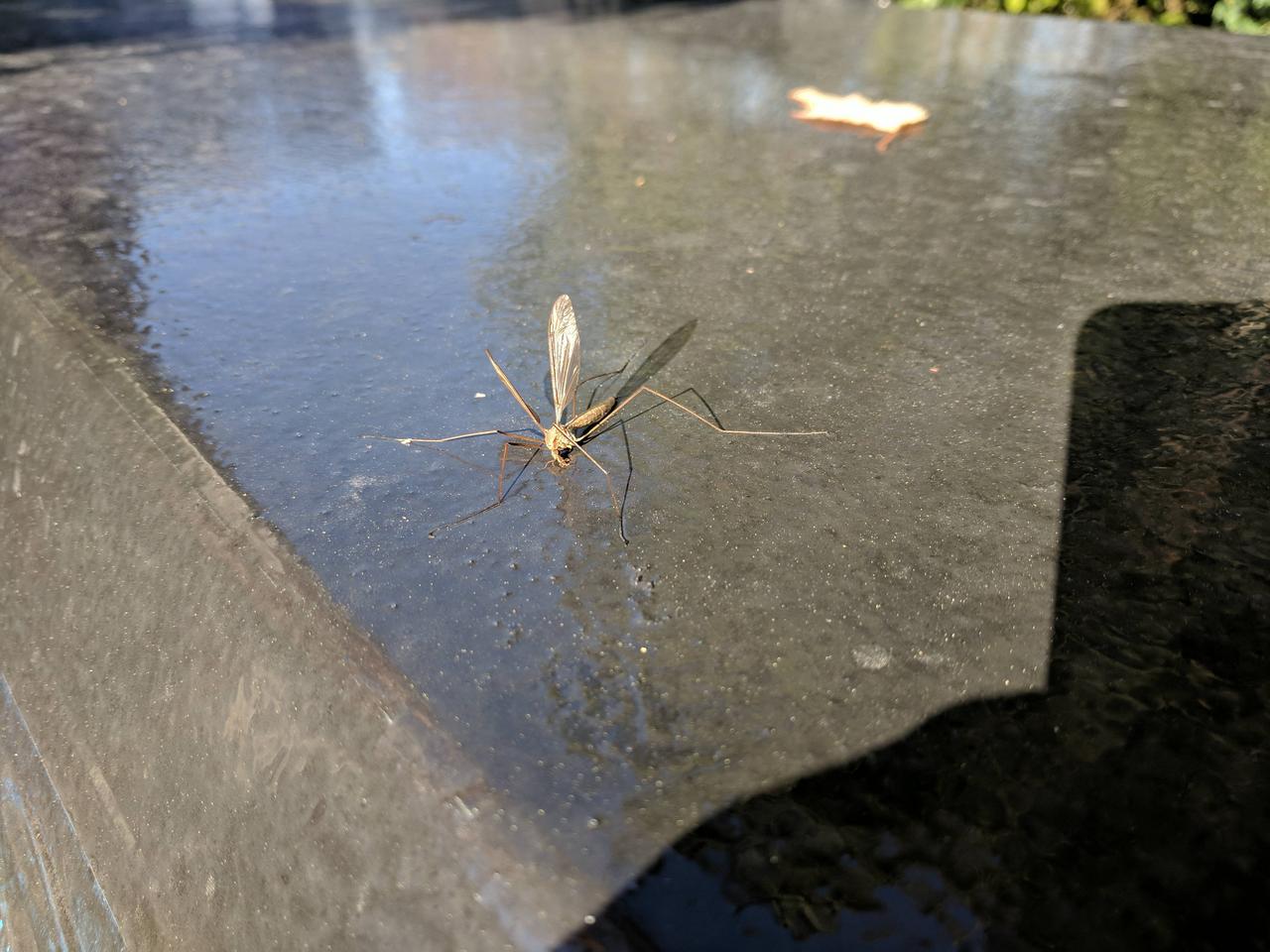 You can skip brushes entirely and spread the graphite layers on really thin. I got my first one on thick-ish by trying to cut it in cleverly with chipping brushes, but got goop on the paint and had to touch up after. Just tape off right the first time and spread it extra thin per layer with a roller. 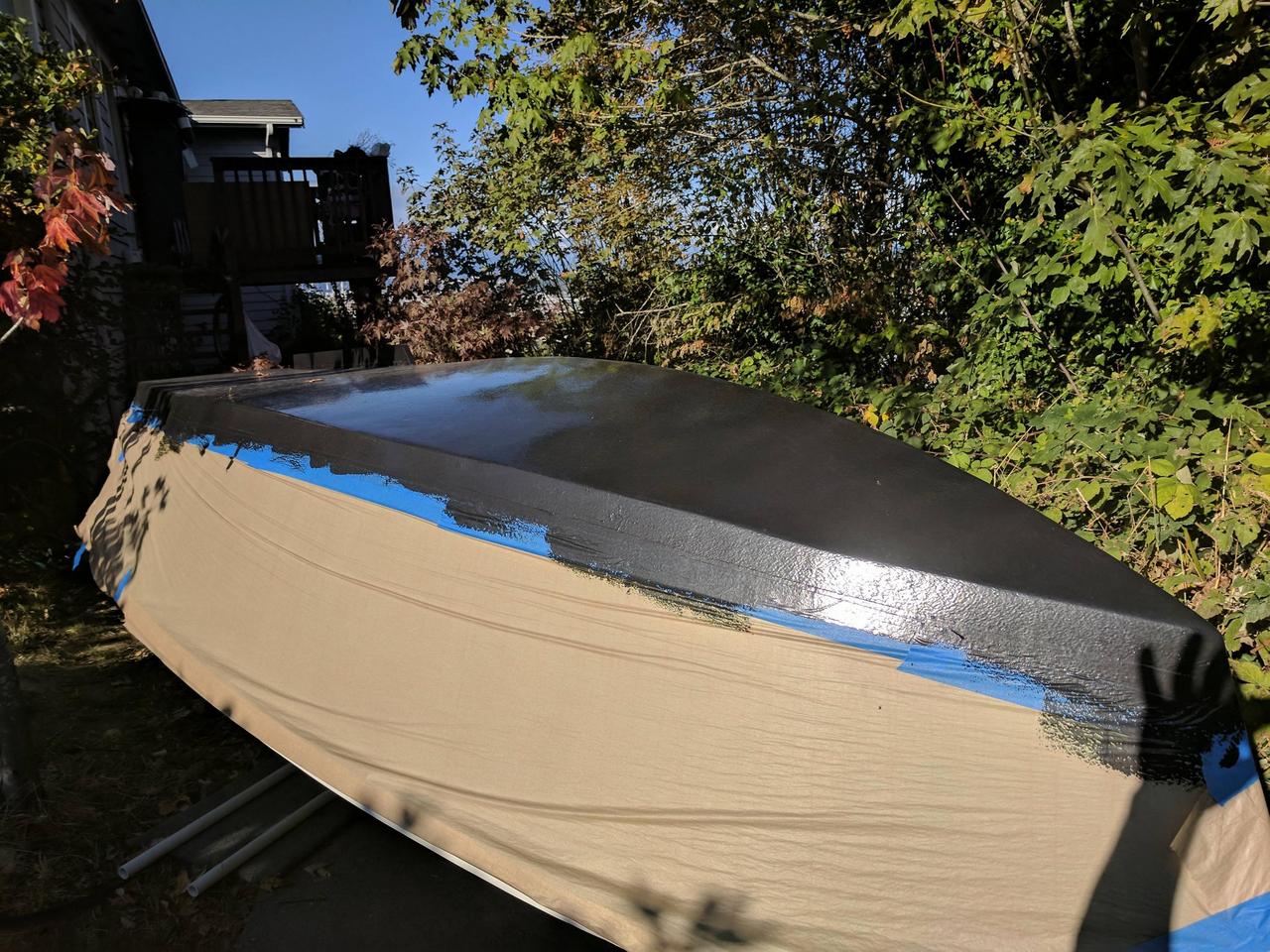 Here's before touch-up, epoxy runs down into tape way worse than paint, and neither are fun to clean up. It doesn't look this bad now. 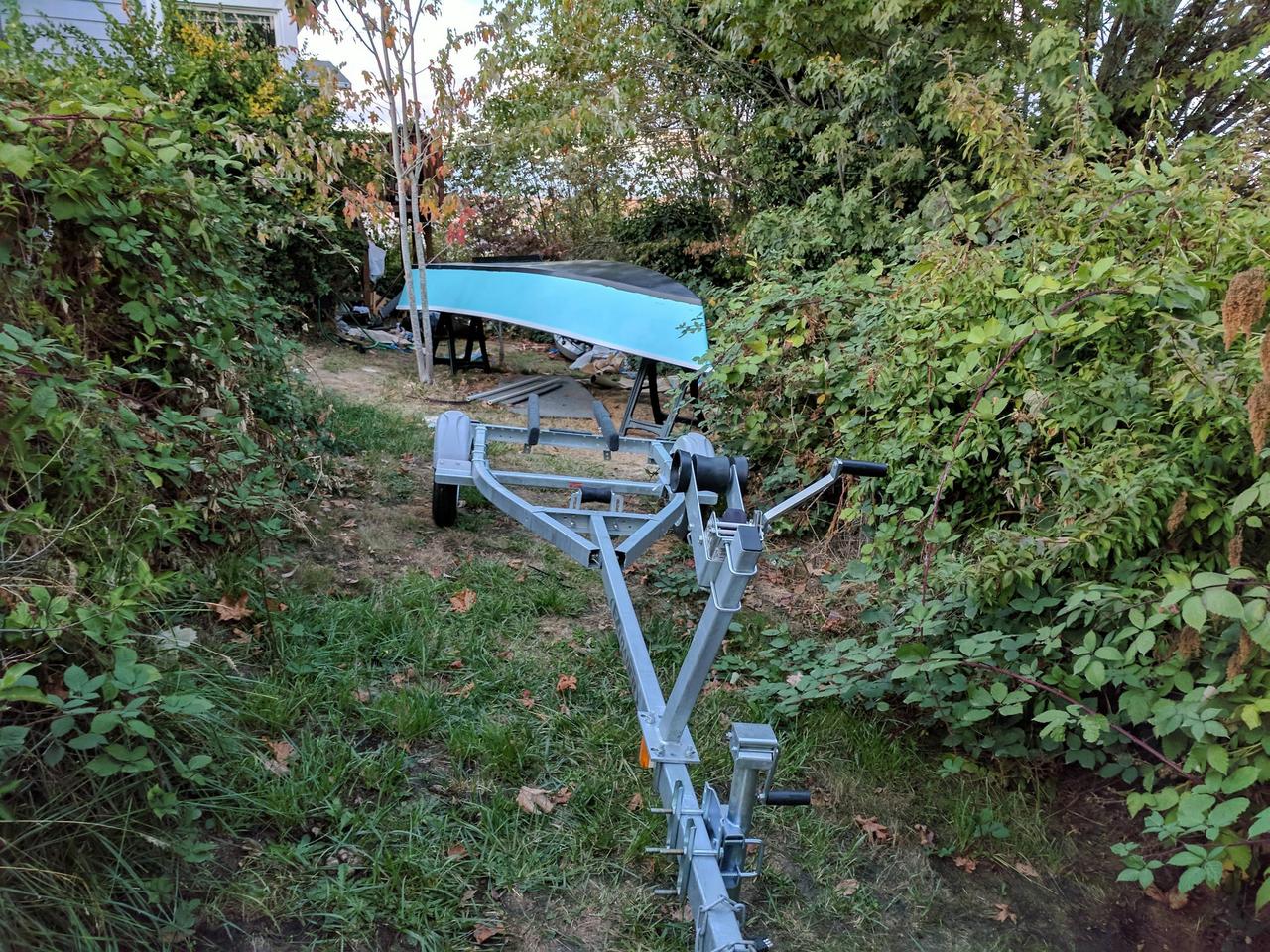 My son and I got it trailered and the motor mounted last weekend. Trim and everything seems to line up, but I'm still really hesitant to take it out. I picked up bouyency foam but it's a bit too cool to set up properly this time of year, so I'll need to hold off until next spring, I think. Same goes for some kiwigrip I picked up. In the meanwhile, I have some ideas for cutting some really thin decking, laser engraving something onto it, and coating it with resin. Basically, I can raise one side up with some kind of filler, a precision 3d print, whatever, and level it all off with decorative decking.

The motor I picked out is a new 20hp so I can probably afford the few extra pounds to make it look like I'd like. The hull is all in the right shape and dimensions, I'm just really dissatisfied that I let myself put in the casting deck and seat out of level.

I also want to put her name, "Lost Summer" somewhere on her. I'm thinking of engraving 4" tall letters in 3mm thick baltic birch, then cutting them out and applying each in epoxy resin on the transom. I'm out of practice with the laser, and it's still pretty new, so I have stuff to do this winter. 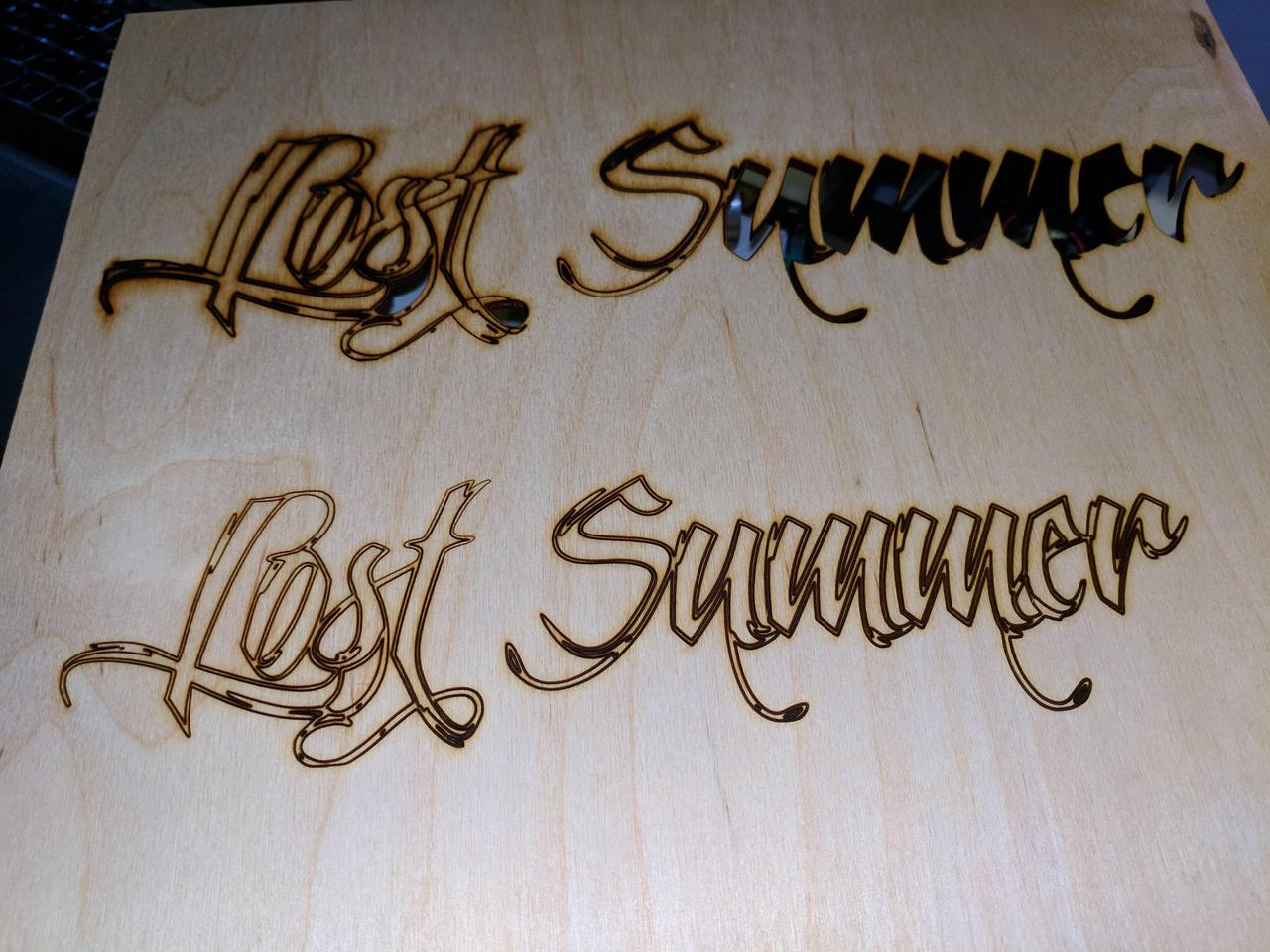 craigyb, she is really looking good and you and your son really put her together fast (by most standards)!!! Cool name selected!! Send us some photos now that the Boat is on the trailer with motor!!! Jeff
Top

I take it you are a single man. If I layed my kitchen out like yours I prob. would be single now. Yikes!!!!

A little saw dust, a little glue, and a lot of love, and she will float.
Top

Yes I am a single man. Who needs a lady friend when you have a kitchen full of lasers and robots?

I have not launched. I moved out of Seattle and my 20hp suzuki was stolen right off my transom before I could take it out. I had just moved in and was sure I'd eat the cost in homeowners insurance if I reported it, so I let the boat sit a bit. I also set the casting deck and seat a few degrees off and they look kennewampus when you eyeball it. Friends tell me they cannot tell, but I think they're being kind, it's more than a few degrees. Luckily, the new place has flat covered areas and I can cut the casting deck and seat out, clean them and the old fillets up, then set them back in an inch or so lower. I was going to just buy new plywood, but dang, even local plywood ain't cheap.

2 years later, boat is licensed and launched, and a Tohatsu 20hp motor sits where the stolen Suzuki sits. With two adults, two dogs, and a bunch of gear, it's still easy to get on a plane and my top speed so far has been 22mph with a whole lotta junk in the boat. The licensing was pretty easy, I just brought receipts and filled out forms to the DOL and they did it up. Nobody there had any idea how to license a home built boat, but we slogged through it.

Took it out today on Lake Wenatchee in Leavenworth, WA. I'm super glad I built a boat instead of just buying a 14' aluminum skiff, it looks a whole lot better if I do say so myself. 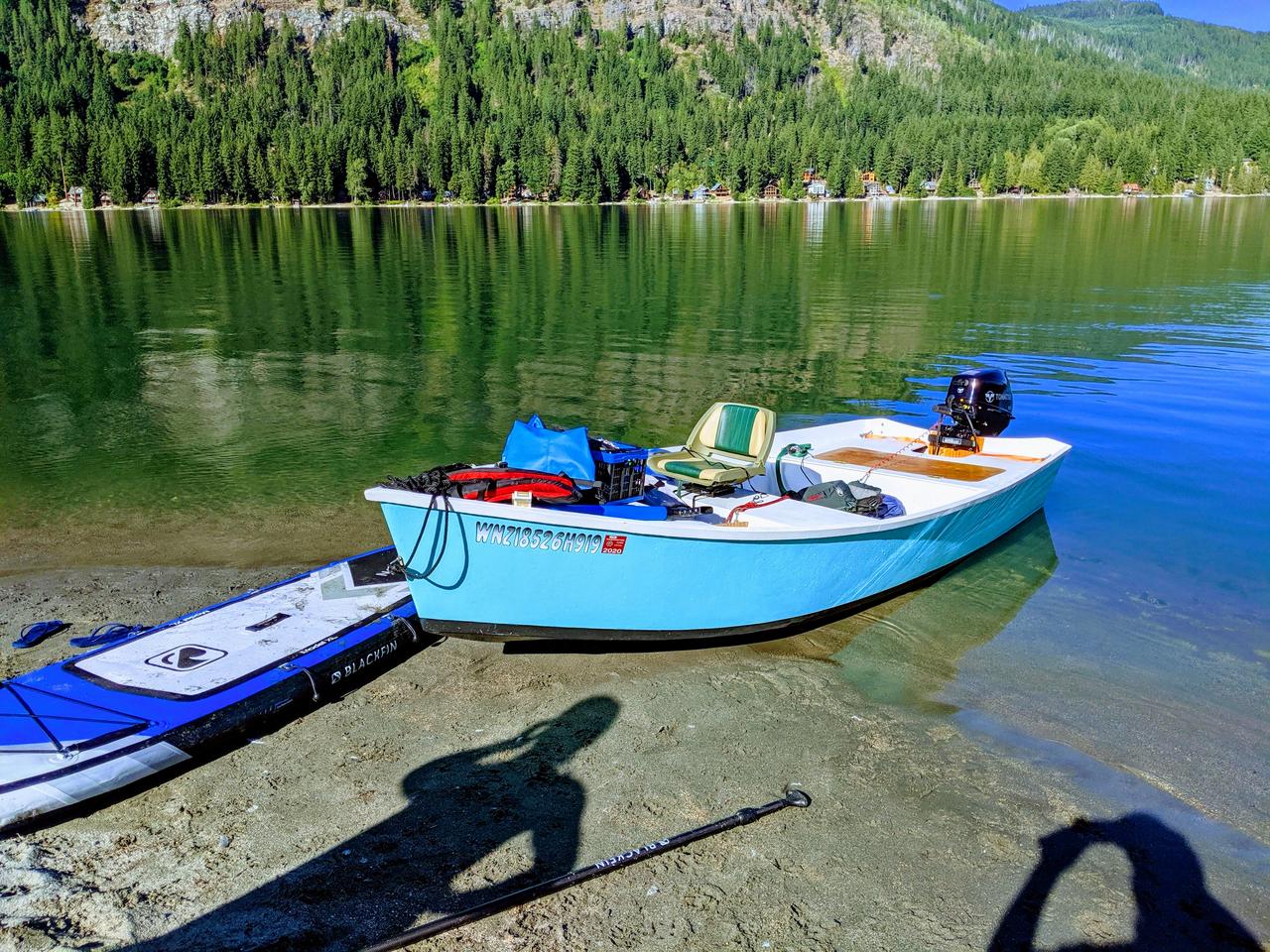 That's a great looking boat and some beautiful scenery right there

What color is the sides?
Eric (aka, piperdown)

"Give an Irishman lager for a month and he's a dead man. An Irishman's stomach is lined with copper, and the beer corrodes it. But whiskey polishes the copper and is the saving of him." --> Mark Twain
Top
Post Reply
36 posts