Please feel free to use the gallery to display multiple images of your progress.
Post Reply
37 posts

As a summer project, and a solution to a problem, we turned to Bateau. Our previous boat was a fiber glass boat weighing in at 140kg (310lbs), and it was quite a hassle to drag in and out of the water onto a trailer. That does require some strength.

Having no experience building a boat, but being quite on the handy side we settled on a FL14, and estimated it to take around a week to build. As of posting this first post, we've been building for 4 days.

First impression on receiving the plans were "what have we gotten ourselves into...", but after reading the plans i realized it wasn't going to be too hard at all.

First day went to buying all the material. Living not too far form a local Swedish chain - Biltema, we could simply buy everything needed at one location, except for the plywood. For the fillets filler we opted for the microballoons, which I will comment on further down. Aside from that, it was everything from the BOM.

Since our local print-shop is closed for the summer, we had to scribe it from the measurements. We scribed the sides, cut them to length and blocked them together. Lesson we learned, don't skim on the epoxy. We also used screws to keep them in place overnight. We also started on scribing the frames.

The second day we discovered we had used too little epoxy, which was clearly visible as the butt block had come loose at some areas. We proceeded by cutting out the butt block for the bottom, then joining the bottom together and redoing the side panels with a fresh coats of epoxy.

We made the butt block on the bottom 14mm (0.5'') so the side panels would sit on the bottom without being seated ontop of the block.

To finish the day we scribed and cut out all the remaining panels of the boat with a jigsaw.

By day three the bottom and side panels were all good, no visible detachments anywhere, and rock hard. Pat on back . My stepdad sanded and made a radius on all the frames, making them look hot and neat. The holes for the ties are spaced at 10cm (4'') making for quite alot of holes, obviously. The side panels all got themselves three holes and one in the bottom to adjust for any forward or backward shift. The holes for the bottom were cut prior to the assembly, making them symmetrical and easier to drill.

Going from the tedious scribing and measuring to finally seeing something that resembles a boat was thrilling! We installed the mid seat, front seat frame and the transom first, and finished by installing the rest of them. The vertical lines added when scribing the panels are a MUST have to make it symmetrical.

After all the panels were installed we used the almighty laser to square it off, although this being tricky with an outside build where the sun never sets.. The boat was straight up until 2/3 down to the stern, giving us some headaches along with not being able to see the laser. The solution was to fix it at the bow, and at both sides when lying down. We then used a clamp and a 2x4 to press it symmetrical at the stern. Perfectly alligned we put the bottom on, squeezed the butt block inside at the front mid seat, scribed and cut. My stepdad went on with cutting all the holes in the bottom and thread the cable strips. With this all assembled and tightened down, the boat felt really sturdy.

By the end of the day we had seamed the chimes, transom and bow. Using the microballoons we found it best to make it super thick, let it sit for a little, stick the fiberglass on, let let the putty stick for a few then apply the epoxy. This reduced the flow of the putty, making for nicer seams. 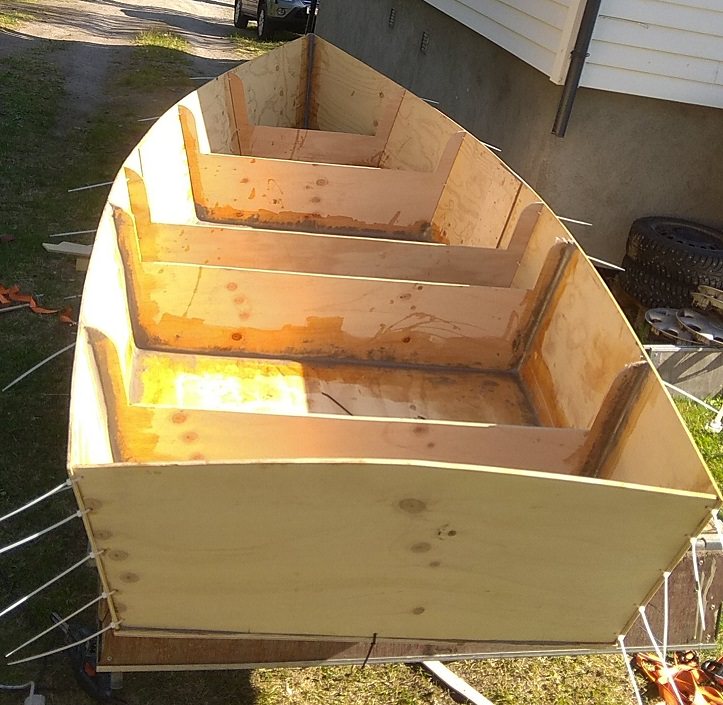 On day day four we finished all the seams inside the boat. The boats interior also got saturated with epoxy before the rain sat in. Having 91F the last couple of days really made hardening the epoxy a breeze.

The seams look messy, but are pretty good looking. Only a spatula was used to distribute the putty. More attention to detail were given to the places where the bevels would be visible. 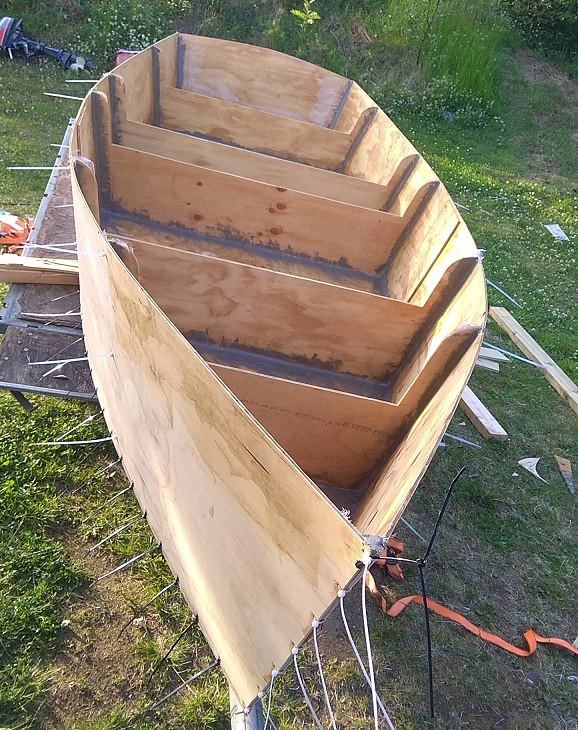 The day ended with some rain, and the boat took some needed shelter under a tarp looking like this. Work scheduled is flipping it, clipping the cable ties, sanding the bottom to give it a nicer bevel in line with the sides, taping the outside and saturating it. Not going for any exterior glass fiber besides the tape on the seams. On the picture above you can see the spacing and the amount of ties on the bottom.
Last edited by _Martin on Tue Oct 30, 2018 12:03 am, edited 4 times in total.

Looking good, and very fast!
Keep it up

Thank you! So far it's been a straight forward build without any mishaps, hoping it'll stay that way, updates to come. Should be seaworthy on paper tomorrow. Hopefully it will be splashing by Sunday/Monday.
Top

The day so far has gone to sanding the exterior hull after removing all the cable ties. Sanding was done with a 40 grit rotary sander. It ate away the ply like a hungry baboon.

After the sanding we continued by filling all the holes with putty and laying the fiber glass seams on the chimes. Of course we ran out of stock on the fiber mesh. To be continued!
Top

Got the fiber mesh and finished the seams, along with the bow. Also filled all the holes with putty and saturated the exterior.

Hi,
Beautiful and fast work. I know why you are so fast with your build you most probably do not sleep at all and work round the clock when the sun does not set in Sweden s summer. I always get tired when it gets dark here in Austria and that is why it took me 5 years by now to build my boat. But I enjoy watching your build in fast forward mode. Keep the pictures coming. I am sure all of us on the forum enjoy seeing them.
Greetings from Karl
All pictures of Micro Petrel AD14 and FS13 :

Thank you. Its a blessing and a curse, this sunlight.

Rub rail has been mounted. Epoxy and screws.

_Martin, Wow, Karl is absolutely correct, very fast build!! Hope you can get some rest in all that day light!!! Jeff
Top

Thanks Jeff! Appreciate the kind words.

Day six ends with the two aft seats being cut out. The whole rear seat will be hinged, and is not mounted in the pictures.

Users browsing this forum: No registered users and 0 guests